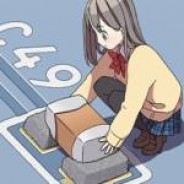 There are multiple keys marked in the file, such as F major、G♭ major、C major etc., the marked beat is 4/4.

17 tracks are used, 16 tracks have notes