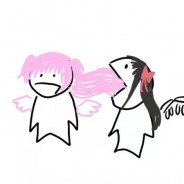 "never leave you alone" is a MIDI music piece in Anime/game music style, which is played by an ensemble of 4 instruments including Acoustic Grand Piano, Ensemble Strings, Flute, and Oboe.

The total duration of this midi music is 4 minutes and 21 seconds, with a total of 985 notes, divided into 7 tracks, and a single tempo of 33bpm.

There are multiple keys marked in the file, such as C major、A major、E major、G major、B♭ major etc., the marked beat is 4/4.

7 tracks are used, 7 tracks have notes