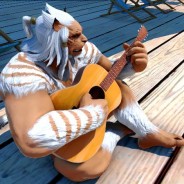 "FF14演奏 to be continued" is a MIDI music piece in Pop Music style, played by Acoustic Grand Piano solo.

The FF14演奏 to be continued.mid file uses only one instrument and is located on one track, which can be regarded as a single-track MIDI file.

The key signature marked in the MIDI file is G major, the marked beat is 4/4.

Some MIDI events such as Pan are used.