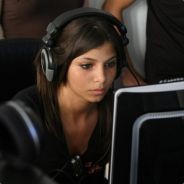 The key signature marked in the MIDI file is C major.

10 tracks are used, 9 tracks have notes